Laos: A boy (Ahlo, 10), who is believed to bring bad luck, is blamed for a string of disasters.  Born a twin and believed cursed, Ahol leads his family, Purple and Kia through a land scarred by war in search of a new home. In a last plea to try and prove he’s not curse 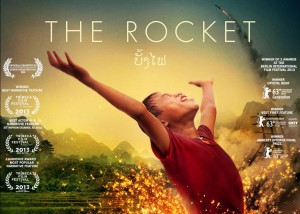 d, Ahlo builds a giant explosive rocket to enter the most lucrative but dangerous competition of the year: the Rocket Festival. As the most bombed country in the world he shoots back at the sky…a small boy will reach to the heavens for forgiveness.

Gripping yet heart-warming, The Rocket is a deeply personal story about the determination of a boy who has the odds stacked against him, set against the epic backdrop of a war ravaged country on the brink of huge change.  The Rocket is a unique view into a world never seen on film before.  Written and directed by Kim Mordaunt (Bomb Harvest) with an original score by the Sydney based award winning composer, Caitlin Yeo.

In the dark of the night on the banks of a stream, lit only by torches, two babies are born.  One dies and is buried, the other, a cursed https://www.thecourtyardclinic.co.uk/buy-cialis-tadalafil-online-uk/ twin, is allowed to live…but there remain questions!

The big day of the competition is upon Ahlo and his family.  It’s time to finish The Rocket and shoot at the sky!

In 2011 my beautiful friend and composer, Caitlin Yeo, won the Professional Development Award (PDA) from APRA (Australasian Performing Rights Association).  The award consisted of an all expense paid, one month master class in film scori

ng in Los Angeles. The culmination of which was 15 minutes on the podium at the famous Fox Scoring Stage with a 65 piece orchestra.  During her brief 15 minutes on the podium (the session was divided between the other members of the class)…with the baton in hand and her heart in her mouth, Caitlin got as many takes recorded as possible with the orchestra doing ‘cold reads’ of her music.  When she came back to Sydney she had her recording in the form of 6 stereo pre-mixed stems (Strings, Brass, Percussion, Room, etc.). I took on the challenge of finishing in Tasmania what she had started in Los Angeles…in the end we were both happy and Caitlin had a brilliant learning experience.

Caitlin call’s this “Exotic Ride” (to an excerpt from the film “Ice Age 2”).